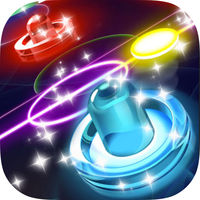 Air Glow Hockey is a free air hockey game, you can play fun hockey games with your firends. This is the best thriller for hockey and glow sport lovers.
You can play easy and hard modes. The opponent’s artificial intelligence is not easy at all.
Air Glow Hockey – 2 multi-player air hockey game for people of all ages. The game offers 3 difficulty levels.
In single Player mode the aim of the game is to play against the computer and beat it by scoring 7 goals first. Whereas the 2 player mode allows players on the either side of the mobile device to play against each other and the player who scores 7 goals first is declared the winner.