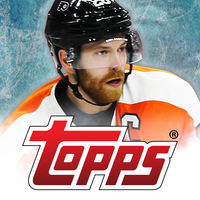 New hockey cards and series released every day based on the live performances of the players!
• Consistent Release of New Cards – Open packs every day FOR FREE with your Daily Coin Reward!
• Daily Contests offer the ability for fans to be grouped together to compete to win rewards. Follow along with the action and acquire points by with your favorite players!
• With all 30 licensed NHL® teams and over 3,000 cards, there’s always something to collect in Topps® NHL® SKATE™ 2017!
• Each of the 300 players in our Series 1 base set is featured on 10 color parallels, each one scoring points in contests at a higher multiplier than the last!
• Watch live games and compete for points in real time against rival fans from around the world! Our scoring system allows users to predict momentum changes, swap cards in their starting six, and feel the excitement of every check, pass, deke, shot, and goal.

GET IN THE GAME!
– New limited cards to collect that indicate the card circulation number.
– Join and be a part of the most comprehensive hockey card collecting community in the world! Expanded trading allows for up to 18 cards to be swapped in a single deal. Our Trader Score allows you to rate your fellow traders on their trustworthiness and deal-making ability.
– Start LEVELING UP today as winning Contests and exchanging cards gets you Experience Points based on the new LEVEL scoring system.
– Improve your players with CARD EXCHANGE! Collect cards of a lower parallel and special Equipment Cards, then trade them in for a higher boosted variant of the same player!
– Exciting STORE DESIGNS that hold unique offers and special packs!

THE BIGGEST COMPETITIONS, TEAMS, AND PLAYERS IN THE WORLD!
– Thousands of official digital cards from every team in the National Hockey League!
– Join the best community of hockey card collectors in the world! Chat with players around the world in the Fan Feed and propose trades with up to 18 cards!
– Consistent Release of New Cards – Open packs every day FOR FREE with your Daily Coin Reward!
– The most dynamic card store in the world! New series, artworks, and editions of cards appear multiple times per day!

SET YOUR LINE UP!
– Set your ultimate line-up every game day with your best SKATE™ player cards and get real-time scores based on live performances!
– Watch live games and compete for points in real time against rival fans from around the world!
– NEW LIVE CONTESTS: now you can compete with other players to win rewards in contests that last from one game to an entire week!