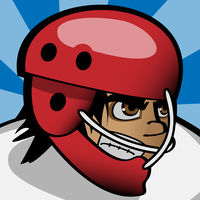 This is where air-hockey meets classic arcade action.

Big Fat Goalie was featured in The Globe and Mail as ’10 iOS apps worth getting for the kids’ quoting it has "great sound effects, and big, chunky graphics. It’s big fun".
It was also Rated 4/5 by CrazyMikesApps.

Check it out for yourself!

The coolest feature is the option to control multiple players on the ice. Together with Speed Boost, which gives you full control over speed, we believe it’s one of the best apps in its class.

We’ve put a lot of effort into creating easy-to-use controls, great graphics and sound.
This game is a must-have for iPad owners as the game really comes to life on the large screen. It’s most fun when played with a friend or mom/dad in two player mode!

Give it a shot! You won’t regret it.
It’s a Universal app. Meaning you can install it on all your devices…iPhone, iPod and iPad!