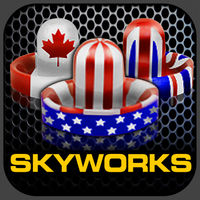 Remember the days of hanging around the local arcade playing air hockey till all hours? Then grab your paddle and head over for some classic arcade action with WORLD CUP AIR HOCKEY™ from Skyworks®, creators of the best quality and most fun sports and arcade games on the iPhone/iPod touch and iPad!??

In Career Mode, play your way through 24 progressively harder opponents to hone your skills and unlock achievements and new paddles!

In Tournament Mode, play one of 10 tournaments to see if you have what it takes to call yourself the World Champion!

In Head-to-Head Mode, compete in real-time against another player on the same iPhone/iPod touch!??

WORLD CUP AIR HOCKEY features ‘state of the iPhone’ 3D graphics, the ability to play your own music, as well as Game Center leaderboards.??

KEY FEATURES:
– 24 countries from the Americas, Europe, Asia and the Middle East
– 12 paddles, such as the ‘Turtle’, ‘Skull’ and ‘Burn’
– Trophy play in quarters, semis, and the finals in Tournament Mode! Choose which country you represent.
– Local and global score boards
– Ability to play your Music from your iTunes play list
– Ability to challenge friends via email
– Facebook connectivity