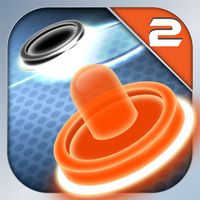 Glow Air Hockey 2 HD+ received 5* from the international Game Academy, which gives you a guarantee of having fun and enjoying it!