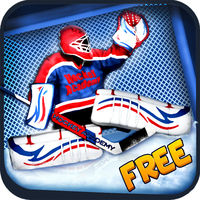 Here is an ice hockey game that will play against you via the computer or with your friends in multi-player mode. You will get 25 pucks for making goals. You must succeed in scoring against the goalie at least 15 times to pass this level.

-Mini-game 2 : Practice against a target: You must throw the puck against the target with the red dot. As the levels increase, the red dot begins to move around faster.

– Mini-game 3 : Practice against the backboard: You must get the puck into the hole where the red dot is located. There are two modes for the backboard. As the levels increase, the red dot begins to move around more rapidly.

– Mini-game 6 : The All-Star cup: For the pros of pros, this mini-game is the 5th level of all the previous mini-games. If you succeed the five levels of Level 5, then you are ready for the professional league.

To be at the top of the Hockey Academy, you need to be good at all of the levels! Try to beat your friends and other players throughout the world with the multi-player option.

We would love your comments ! Please send us your feedbacks.
Let us know at: [email protected]