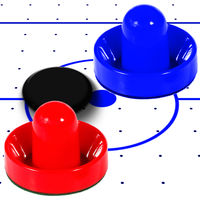 **SINGLE PLAYER**
– Play against a computer player in three difficulties : easy, medium, and hard (if you have what it takes!)

**SPLIT-SCREEN**
– Grab a friend (or an enemy!) and play him/her on the same device.

**ONLINE MULTIPLAYER**
– Play head-to-head against anyone in the world over Game Center.